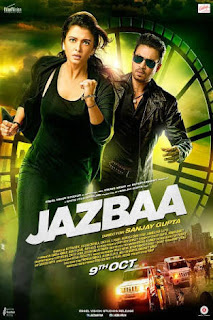 Jazbaa- Too much of Melodrama plays spoilsport!

Aishwarya’s comeback vehicle ‘Jazbaa’ hits the theatres today. A remake of the hit South Korean movie ‘Seven Days’, Jazbaa promises to be an intriguing thriller. While ‘Seven Days’ had received huge critical acclaim, lets find out if its Indian counterpart manages to impress the audiences and the critics alike.

Jazbaa is the story of Anuradha Verma (Ash), a successful lawyer whose world turns upside-down when her daughter, Sanaya gets kidnapped. She is forced by the kidnapper to defend a convicted rapist. Yohan (Khan), a suspended cop helps her in her quest for getting her daughter back. But will she succeed in finding her daughter?

Jazbaa boasts of an intriguing story which will keep you hooked for most parts. But it is spoilt by certain illogical sequences. A good story is let down by a mediocre screenplay. Although it is fast-paced, yet it is interrupted by certain unwanted sequences and lots of melodrama! Emotional scenes are over-dramatized, which fail to connect with the audiences in the initial half of the film. The climax is well-written and it delivers a strong social message. Dialogues are too ‘filmy’ and definitely not meant for a thriller like this. Maybe Gupta wanted to make it more mass-appealing, but in the process, has ruined the soul of the movie.

It is good to see Aishwarya on screen after a gap of 5 years. The role perfectly suits her and she delivers a decent performance. But in certain scenes, she overacts. The scene in which she screams her lungs out is definitely a ear-deafening moment for the audiences. Irrfan Khan delivers an excellent performance. It is a delight to watch him on screen. He is witty and has immense screen presence. Shabana Azmi is such a terrific actor. She performs effortlessly as the victim’s mother. Other supporting actors also perform brilliantly.

Cinematography will remind you of a typical ‘Sanjay Gupta’ movie! Everything has been shot in green. Certain sequences have been very well shot. The climax scene is perhaps, the highlight of the movie. Editing is crisp and maintains the pace of the movie. Background score is too loud and distracting at times. It is definitely a let-down!

Direction by Sanjay Gupta is mediocre. He has incorporated a lot of unnecessary elements in the film. Without the melodrama and the cheesy one-liners, the film would have been a delight to watch. Overall, the movie is not as good as the original!