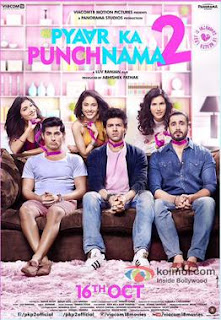 Love gets punched hard, very hard! And this punch is delivered by none other than 'Luv' himself! Irony, isn't it? Well, don't get confused. Coz here, punch doesn't mean a knockout. Instead, it means hilarity!

Director Luv Ranjan is back with the sequel of the 2011 sleeper hit, 'Pyaar ka Punchnama'. Labelled as a typical 'guy' film, PKP had created a huge fan base, thanks to its hilarious one-liners and Kartik Aryan's 5-minutes monologue. Will PKP 2 be able to live upto our expectations? The answer is a definitely a yes!

The story is similar, but the characters are different. This time we have Gogo, Thakur and Chauka who fall in love with three different girls almost at the same time. The rest of the movie shows the problems they face in their relationships and their take on love. The story is similar and quite predictable. But this time, the climax has been very well written. A fast-paced narrative keeps you engaged from the very beginning. The first half scores better than the second half in terms of screenplay. There are rarely any dull moments in the film. Dialogues are the highlight of the movie. The movie is filled with hilarious one-liners, which do manage to make you laugh! Even this one has a monologue, just like its prequel. This time it is longer and funny, but only in parts! The dialogues work perfectly in favour of the film!

Kartin Aryan seems much more confident in this sequel. He does a good job and delivers the monologue quite well! Omkar Kapoor has been perfectly cast and he does manage to impress you! Sunny Singh performs quite well and has a good command over his dialogue delivery. Among the girls, Nusrat Bharucha plays her character cleverly. Her character requires her to be irritating and she does that well! Sonali Sehgal and Ishita Sharma deliver a wonderful performance!

Cinematography is much better than the first part. Even the production values are better than PKP. Editing is crisp and has been well dealt with. Among the songs, ‘Sharaabi’ would be my pick. Other songs are just average.

Direction by Luv Ranjan is quite good. He manages to deliver a light-hearted comedy film without going too over-the-top. The story seems to be repetitive but the film does entertain. Despite being entertaining, the film might not appeal to women, owing to ‘anti-women’ scenes. Overall, the film offers you wholesome entertainment!


Final Verdict- Watch it if you want a good laugh this weekend!
Posted by Penfreak at October 19, 2015