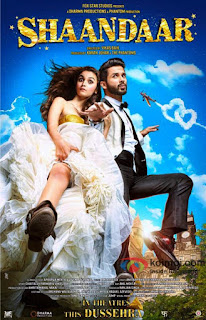 Shaandaar- A not so ‘Shaandaar’ venture!

As the name suggests, Shaandaar promises to be a magnificient movie. And yes, it is magnificient- in terms of budget, performance and great production values! Had it been a bit more ‘shaandaar’ in terms of script and screenplay, it would have been a delight to watch this movie!

Shaandaar has created quite a buzz, thanks to a fresh pairing of Shahid-Alia and the concept of destination wedding. Also, expectations are quite high from director Vikas Bahl, whose last film ‘Queen’ turned out to be a huge success. Will he be able to recreate the magic this time? Lets find out.

Shaandaar is the story of two insomniacs- Jagjinder and Alia, amidst the backdrop of a grand wedding (referred to as a ‘business deal’) between two families. Eventually, Jagjinder (the wedding planner) falls for Alia (bride’s step sister) and love blossoms between the two.

The biggest let-down of the film is its story and screenplay. The story can be best described as ‘a dull plot with a few hilarious situations and some strong emotional and romantic scenes’. The screenplay is quite weak at parts. The narrative is slow and fails to hold your interest. Only a few scenes have been brilliantly written. Even the characterization has not been properly done. The writers could have written the story in a simple and entertaining manner, rather than unnecessarily complicating it.

It is only the actors who make the movie worth watching with their brilliant performances! Shahid Kapoor manages to charm you as Jagjinder. He has immense screen presence and manages to hold your interest, inspite of a poor characterization. Alia Bhatt performs effortlessly and her performance seems to be natural.       Her chemistry with Shahid is too good. Pankaj Kapur, as usual, is superb. He takes the film to a whole new level! It is a delight to watch him on screen. Debutante Sanah Kapoor (Shahid’s step-sister) impresses you as the bride! She delivers a brilliant performance and manages to leave a mark. Other supporting actors, too, deliver a decent performance.

Cinematography is just ‘shaandaar’! Certain scenes have been very well captured. With a high budget and great production values, the movie has been shot in a ‘fairytale’ manner. Some scenes seem to be stretched and could have been edited properly. Background score is just perfect for a movie like this!

Director Vikas Bahl seems to be trapped in his own web. He tries to engage the viewers by complicating the story but alas, fails miserably! This was definitely not expected from Bahl- the same person who directed ‘Queen’. Hope he comes up with something better the next time!


Final Verdict-  Watch it only if you are a Shahid-Alia fan. Otherwise, give it a miss!
Posted by Penfreak at October 26, 2015