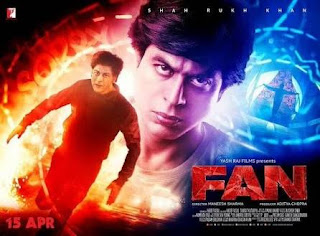 Fan: This SRK v/s SRK drama is flawed yet entertaining

During the initial days of his career, SRKs claim to stardom was his portrayal of villainous roles- be it in Darr, Baazigar or Anjaam. Years later, he uses the tried-and-tested formula in one of the most anticipated films of the year, Fan. Will ‘Fan’ prove to be a landmark film or will it just be another ‘no-brainer’?

Gaurav Chandna (SRK), a die-hard fan of superstar Aryan Khanna (once again, SRK), runs a cyber café in Delhi. A lookalike of Aryan, Gaurav makes it big in his colony when he wins the ‘best actor’ trophy at the annual competition of his colony ( some ‘Super Sitara Competition’) by mimicking Aryan. Trouble sets in when Gaurav decides to visit Mumbai to wish Aryan on his birthday and dedicate his trophy to him. Will Gaurav understand his limits or will he go too-far to fulfill his obsession?

A refreshing take on the obsession of a fan, the movie has been well-conceptualized and is one of the most unconventional films seen in recent times. However, the screenplay plays a spoilsport. The first half of the film has been prodigiously executed, keeping the proceedings completely realistic and compelling. The cyber café action sequence has been convincingly choreographed. But as Gaurav Chandna steps out of his house to meet Aryan, logic gradually steps out of the film. The confrontation scene between Gaurav and Aryan in Mumbai has been well shot. But the second half becomes somewhat quixotic. Why, on earth, would a superstar go chasing his harasser, all by himself? Aryan has been shown to be extremely impuissant towards the second half, which makes the narrative even more implausible. The climax, although predictable, is the accent of the film.

Performance-wise, SRK is the show stealer. With the maximum screen time, SRK shines in each and every scene. This is clearly one of his career-defining performances. His portrayal of Gaurav Chandna, an obsessed fan, will be adored by the audiences. Greg Cannom has done a fantastic job with SRKs prosthetics and make-up, giving him the look of a 20-something. Sayani Gupta, as Aryan’s manager, manages to hold her own, despite a lesser screen time. Shriya Pilgaonkar, as Gaurav’s friend, looks adorable in a small, yet important role. Waluscha D’Souza, as Aryan’s wife, gets the least screen time and has nothing much to perform. Deepika Amin and Yogendra Tiku, as Gaurav’s parents, perform well.

The background score, by Andrea Guerra, fits into the mood of the film. Manu Anand’s cinematography manages to capture the movie beautifully. The scenes in Dubrovnik have been brilliantly shot. However, the editing could’ve been a bit more sharper.

Maneesh Sharma’s direction can be best describe as a mixture of ‘realism and formed’. The message he wanted to deliver comes across beautifully on the screen. Only if he had kept the second half grounded, the movie would have been way better.
3 stars for the film and 0.5 for SRK’s performance; his comeback as an ‘actor’!

Final Verdict- A treat for all SRK fans. Others wouldn’t regret watching it once!
Posted by Penfreak at April 15, 2016