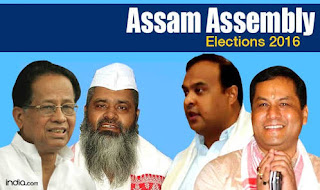 Here is a detailed analysis of everything you got to know about this election.

New trends seen in this election-
1) This was BJPs first success in North-east...they managed to get 61 seats in the state almost covering majority by themselves which is very impressive considering the fact, they grew from merely 5 in 2011.
2) A dream of Congress free India has advanced a step forward as in this election they suffered a heavy loss decreasing from 78 in 2011 to just 25 this time, besides losing out Kerala too.
3) Another new trend that has been seen in this election was in most of minority dominated constituencies a fierce battle was really between the INC and the AIUDF which is believed to have benefited BJP alliance a lot.
4) Barak valley, where it was expected that BJP will find it tough to get seats actually managed to wrestle 8 out 15...a very impressive show, making it clear the saffron party's mass appeal.
5) Another very good indication of this election is the active participation of people in decision making this time which is an important aspect of democracy...phase 1 recorded 81.84% and phase 2 recorded 87.19....overall 84.64. People were assertive of the fact that they wanted change.
6) The tea tribes that constitute 17% of Assam's population and are traditionally the Congress's vote bank this time voted heavily for the BJP. As someone said "The chaiwala captured the heart of the chai producers"
7) Districts where the BJP alliance had a clean sweep- Nalbari, Kamrup metro, Sonitpur, Dima hasao, Kokrajhar, Chirang, Udalguri, Baksa, Dibrugarh.
People are now expecting very highly from the new government, they ought to live by the high hopes they have shown.
Meanwhile the Congress lost yet another state in Kerala to the Left, Mamata and Jayalalitha managed to keep the throne for yet another term.
The bottom line remains that, Modis main challenge will now be regional leaders, Congress is ceasing to be the main anti-BJP factor
Posted by Penfreak at May 20, 2016