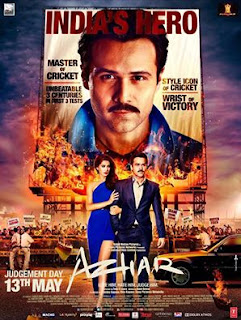 Azhar- Entertaining, but fails to leave any impression!


After the enormous success of 'Once Upon a Time in Mumbaai' and 'The Dirty Picture', Ekta Kapoor is back with another biopic, 'Azhar'. Based on the life of India's Cricketing Legend (of his time)- Mohammad Azharuddin, who was involved in one of the biggest betting scandals, 'Azhar' has created quite a stir, thanks to its controversial subject! But will it appease to the audiences?

First things first, 'Azhar' is not a biopic, as disclaimed by the makers. This becomes evident towards the second half of the film, as several facts have been tampered with, to present this tainted cricketer in good light. The movie starts off with a sting operation, showing Azhar's (Hashmi) involvement in a betting scandal, alongwith bookie M.K. Sharma (Rajesh Sharma). The movie, then moves back and forth in narrative, showing Azhar's life in bits and pieces- his journey as a cricketer, his 'nikaah' with Naureen (Prachi Desai), his affairs with Sangita (Fakhri) and his involvement in the scandal. The climax focuses on redeeming Azhar's lost reputation and on clearing his name in the scandal.

The story, although fictional, has been well penned out but is let down by a feeble screenplay. The first half manages to keep you hooked (especially the first 20-30 minutes), but then the narrative loses steam midway. The proceedings happen just for the sake of it, and there is not much emotional connect with the audiences. The betting scandal, although mentioned throughout the film, has practically been given a backseat in terms of narrative. The characterisation (apart from Azhar) has not been properly done with. The film does have its moments, but those are easily forgettable. The dialogues, though hackneyed, are mass-appealing.

Emraan Hashmi does a commendable job in the titular role, amongst the entire star cast. His body language, as usual, does the talking. He manages to overcome the limitations of the screenplay and carries off the film well. Prachi Desai, in a brief role as Naureen, does manage to grab eyeballs with her performance. Nargis Fakhri, as Sangita, is far from good. She adds a lot to the glam quotient, but when it comes to acting, she is totally blank. Gautam Gulati makes an impressive debut as Ravi. Lara Dutta saves the second half of the film with her energetic performance as a lawyer, Meera Verma. Kunal Roy Kapur, as Reddy, is lovable. His accent and the climax stint will be loved by the audiences! Other supporting actors perform equally well!

Cinematography is strictly average. It could have been much better in some parts, but overall it is passable. Editing and background score have been sincerely dealt with and save the film from sinking.

Tony D'Souza's direction is somewhat amateurish. He does manage to keep you hooked throughout the film, but does not leave any impact on the audiences, which was required for a movie of this genre. Clearly, a passable venture it is!

P.S- Don't have any high expectations from the film. Only then, you will like it!

Final Verdict- You won't regret watching it once, atleast.
Posted by Penfreak at May 15, 2016