“Better to die than to be a coward" is the motto of the world famous Gorkha army, whose might and valour has transcended boundaries, but what do we really know about the gorkhas, lets try to find out. 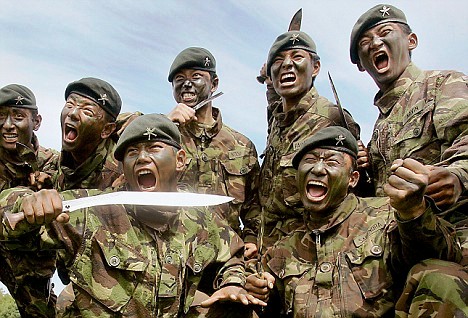 Origins
Historically the term ‘Gorkha and Gorkhali” is derived from the hill town and district of Gorkha from where the “Kingdom of Gorkhasthan” expanded. The Gurkhas introduction to the British Army begins in 1814 during the Anglo-Nepalese war.Though the British were militarily successful, attempts to annex Nepal failed and the hostilities ended with the signing of the Sugauli Treaty. The British were so impressed with the Gurkhas fighting abilities, their loyalty and ferocity that they later encouraged them to volunteer. Gurkha troops then fought for the East India Company in its wars in the subcontinent.  The Gorkhas became an integral part of pre-independence British army. From then on, Gorkhas have been a part of Afghan Wars, Indian Rebellion of 1857, both world wars (More than 200,000 fought in both world wars, 43,000 of which lost their lives) and other United Nations peace keeping missions in Lebanon and Sierra Leone too.

The very first Gorkha regiments were raised by British to serve in British Indian army. After India’s Independence, six regiments, the 1 GR, 3 GR, 4 GR, 5 GR, 8 GR and 9 GR were retained in the Indian Army, while 2nd, 6th, 7th and 10th joined the Brigade of Gorkhas in the British Army. Another regiment was raised by the Indian Army, the 11 Gorkha, to accommodate the soldiers who refused to be transferred to the British Army.

Currently, the Indian army is indebted to the service of 40,000 brave Gorkha soldiers in 42 different battalions of 7 regiments. One of the most famous platoon of Gorkhas, 1/11 Gorkha Rifles is one of the most decorated with 11 vir Chakras, 2 Maha Vir Chakras, 3 Ashok Chakras and 1 Param Vir Chakra. The stories of its Param Vir Chakra winner Lt. Manoj Kumar Pandey are a case study in their glorious history of courageous war footings.​

Another famous battalion of Gorkhas is the third battalion of the 4 Gorkha Rifles which was instrumental in Operation Meghdoot in Siachen. The 8 Gorkha Rifles are also have a glorious past as they produced one of the only two Field Marshals for India – Sam Manekshaw. India’s current chief of army staff, General Dalbir Singh Suhag, is also from the Gorkha Regiment which is a testament of the most incredible services of Gorkhas.

Facts:
i) Gorkhas has been instrumental in all Indian victories in every battle since 1948 till now.The character played by Ajay Devgan in the film LOC Kargil  (Capt. Manoj Kumar Pandey, PVC awardee) was a gorkhali of 1/11 regiment.

ii) Officers in the Gorkha Regiments of the Indian Army have to learn the Gorkhali language to be able to interact with their men in their native tongue.

iii) Recently a battalion comprising entirely of Indian Gorkhas was set up, this is the 1st time a new gorkha battalion have come up in 50 years. The Sixth Battalion of the First Gorkha Rifles (6/1GR), christened  "Kanchi Paltan" has been raised at Sabathu in the Shivalik foothills near Shimla, that houses the 14 Gorkha Training Centre.

iv) “If a man says he‘s not afraid of dying, he’s either lying or he’s a Gorkha.”This quote by Sam Manekshaw, Indian Army’s first Field Marshal, aptly describes what it means to be a Gorkha.

v) The queen has two personal Gorkha officers who directly attend official state and key events with the queen. They’ve been present in all state affairs since the Gorkha’s introduction during queen Victoria’s reign.

vi) Dalbeer Singh Suhag the current chief of army staff is also from the Gorkha regiment, he was comissoned in 4/5GR in 1974, and according to the traditions of the 5th GR wears his head gear with the strap below the lower lip. Other regiments wear chin straps below the jaw.
An interesting account need to be told here about the chin strip---
When the Gorkhas joined the British army they proved to be slight primitive in war, they always screamed and then charged at the enemies, which was harmful for launching surprise attacks. So the commander of a gorkha regiment asked his men to wear the chin strips under the lips, So that they would be reminded not to scream when they get into attack mode. The 5th Gorkha Rifles still maintains it. 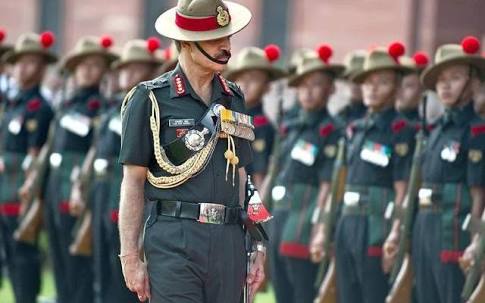 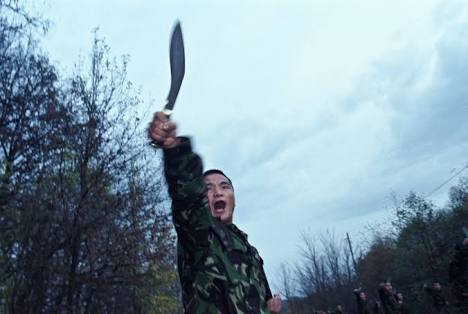 The Gurkha’s traditional weapon and all-around utility tool, is the powerful Khukri, an inwardly bent cross between a machete and a knife, measuring 18 inches and able to split a man’s head down the middle midway to the chest in one blow. Ghastly indeed. According to tradition, once drawn, the kukri demands blood, if not the enemy’s, then the owner’s will suffice. The regimental insignia of the gorkha regiment also consists of paired crossed Khukri. 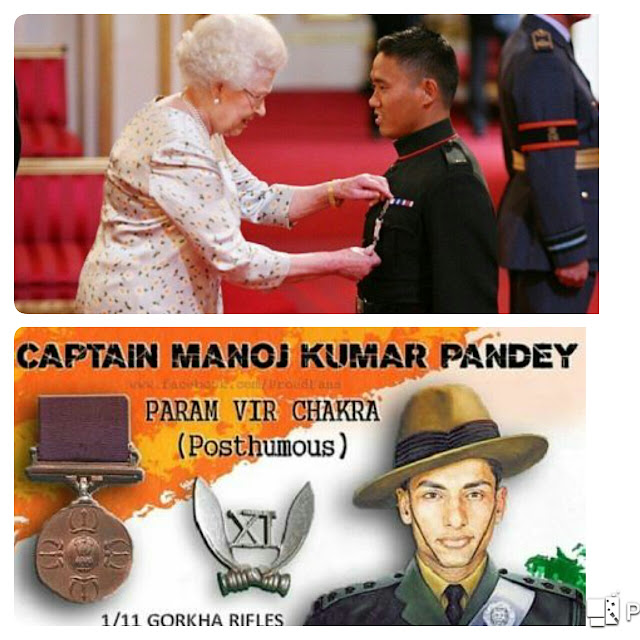 Gorkha Regiments are one of the most decorated regiments of Indian Army.They are considered finest soldiers worldwide..

Three Gorkhas has been awarded the highest military decoration "Param Veer Chakra" Which are most by any regiment of Indian army.In addition to this, various Gorkha Regiments have been awarded 33 Maha Vir Chakras, and 84 Vir Chakras besides 26 victoria cross. the British military’s highest distinction for valor,while 2,700 were awarded other medals in World War II alone. More recently, a Gurkha sergeant was awarded the Conspicuous Gallantry Cross for single-handedly fighting off a Taliban attack to his base in Afghanistan. 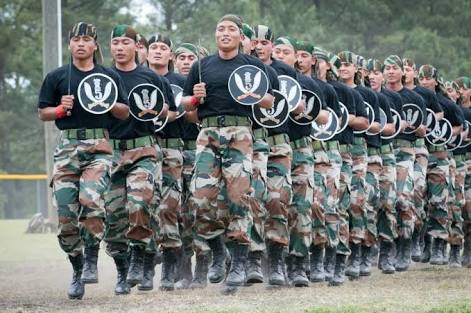 More than 28,000 Nepalese from the hills strive to become a Gurkha every year to fill just 200 places. The selection process is said to be the toughest in the world and the competition is stiff. The ranks have always been dominated by four ethnic groups: the Gurungs and Magars from central Nepal; and the Rais and Limbus from the east, who live in impoverished hill villages. 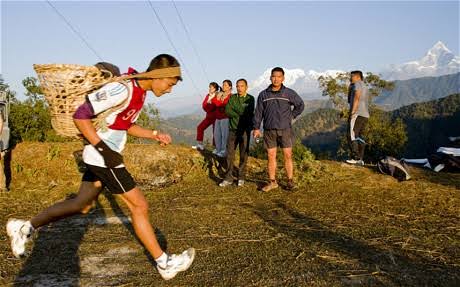 As part of their training, recruits are expected to pass several educational, language and fitness tests, among them running a 3-mile uphill course carrying 70 lbs. on their backs and doing 70 sit-ups in 2 minutes. After meeting the initial age, height, weight and schooling requirements, recruits go on to the second stage for English language training, maths, fitness and an initiative test. The third stage includes: 3-month language training, military skills, Western culture and customs, general weapons training and, of course, several fitness tests.

Stories of the Gurkhas bravery and skill abound have been well documented, such is the reputation of these hardy nepali hillsmen that stories of enemy fleeing their position upon hearing rumours of their advances abound. 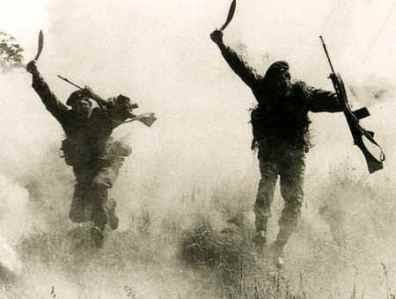 These brave soldiers are an asset to all the nations they serve, In India every year there is a tussle in the IMA as the top cadets try to get into this regiment of the braves. Courage on war front and innumerable gallantry awards notwithstanding, the aura of Gorkhas on the field demands immense respect and makes the enemy tremble with fear.