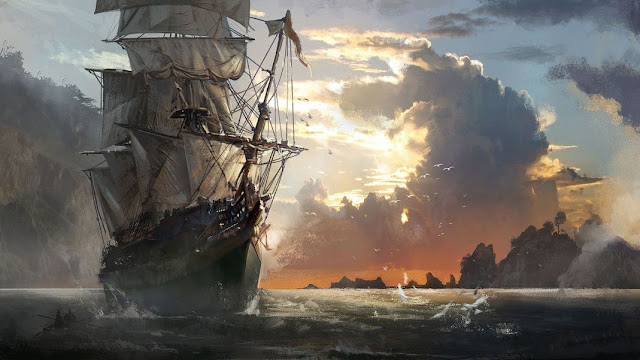 (All characters and names are fictional)

This is medieval age poetry.  Set in the old German period, it depicts a soliloquy in two different time frames.

(The lady is a new recruit to the Battle ship 'Ehre'. Her father is the captain. She believes in omens and has premonitions.  Her comrades call these things 'strange'.

She liked one Roemho. It appears they had romantic interests. Yet he didn't share all secrets with her. He seemed to be the only person to believe her.

There was a highly confidential meeting called one day.  It was very dark,  maybe because of the weather that she thought it wasn't morning yet. There was another battle ship Prinzessin. Some of the cadets were to be transferred there, Roemho being one of them. He came to bid adieu with a seaflower bud. She wanted to tell about her premonition this time but refrained,  maybe she feared criticism.

There were storms that night.  Terrible storm.)

I see premonitions.  People don't believe.
I tell them 'strange things' they say,
Had it not been for my father so dear,
On the Ehre,  I would have been a dismay.

I like Roemho. He believes me.
He says he can see through my eyes.
I like his eyes too,  you can see them glisten sometimes.
At times, they turned dark you see,
He covers pain, I know
But, in them,  was love for me.

Father called a sitzung
in the wee hours of the morning.
Morning? I think it isn't dawn yet.
They say it is morning,  I believe it now.
Prinzessin was here,
Oh,  and yes,  (before I forget),  my gut was wrenching!

Roemho came with a latifolia bud.
"Auf weidersehen",  eyes glistening again.
(I will take away his eyes someday)
The deck was full,
Yet,  the clouds were so dull.
The waves so incessant,
a flickering incandescent.

Dusk brought volumous patters.
Ehre was docked
Blinded night it was
While the waves rocked.

(It was months and it was known that the Prinzessin capsized.
She was in agony.  She regretted for not having told him.  That 'not so strange' new one wasn't her,  she realised.

Now they say he's dead and this time she really has to believe!)

Day fifty eight it is
Prinzessin capsized,  I was told.
'Did you believe me? ',  I asked
Whom?  To that 'not so strange' me!
" Auf weidersehen " already is it?
He is dead, and so, this time I had to believe.

(The poetess is a 3rd semester MBBS student from Gauhati Medical College)
Posted by Penfreak at October 21, 2018

Email ThisBlogThis!Share to TwitterShare to FacebookShare to Pinterest
Labels: Poems