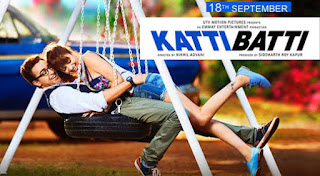 After delivering an action-packed entertainer last week (Hero), Nikhil Advani is back with a rom-com, Katti Batti. While its trailer has created quite a buzz, it would be interesting to see whether the movie lives up to our expectations. Lets find out.

Katti Batti is the story of two live-in partners, Payal (Kangana), who believes in ‘timepass’ relationships and Maddy (Imran), who is madly in love with our heroine. Then one day, without any warning, Payal leaves Maddy. He is heartbroken and thus sets on a journey to find Payal and confront her.

Katti Batti has a weak storyline. It has nothing new to offer. The story fails to hold our interest from the very beginning. It is not really a romcom- there is very little of romance or comedy in the movie. The screenplay is dull and some of the scenes are very stretched. The characterization is not properly done. However, the climax is a bit different. But inspite of a good climax, the film couldn’t connect much with the audience. The dialogues are over the top and quite ‘filmy’. Overall, the writing department doesn’t score well.

Katti Batti is Imran Khan’s comeback movie after a gap of almost two years. The film is centered on him and he delivers a decent performance. Emotional scenes are his weak point. He performs well in some of the scenes but is let down by a weak storyline. Kangana, on the other hand, doesn’t get much scope to perform. Her screen time is quite less and it seems that she has been roped in just to add glamour. It is quite disappointing to see that an actor like Kangana has been left unused by the director. Other supporting actors do not perform well- maybe they were not given proper directions by Advani. Among the supporting cast, our Airtel 4G girl (Sasha) is a surprise element. Although she has nothing to perform, yet she generates some amount of curiosity with her screen presence.
The music department is the only saving grace of the movie. Advani’s association with Shankar Mahadevan is known to create some good melody and this time too, they deliver some good numbers. I would rate ‘Sarfira’ as the best track. It is a foot-tapping party number which has also been choreographed quite well.
Editing is the major drawback of the film. Certain scenes are so stretched that they fail to leave any impact. The editing department could have been more sincere with their work. Cinematography and other technical aspects are good.

Advani’s direction is mediocre. He has tried to make the movie ‘youth-centric’ but fails miserably. Signing an actress, who is known to deliver power-packed performances, is simply not enough, Mr. Advani. You should know how to extract the best out of her!! Better luck next time!!