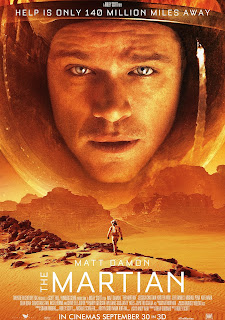 As I sat down for 'The Martian' after weaving my way through the midday traffic (because yours truly, right on the footsteps of Barry Allen doesn't know what being on time means), I had absolutely no idea of what Ridley Scott's new movie was about. I hadn't been through a single trailer and all I knew was it had Matt Damon. The first time I heard of, extraterrestrials popped into my head. I went into the movie completely blank.

And thank God, I did. The digital age, trailers, leaks, entertainment sites have ruined one thing from cinema. The sense of awe. We have become unable to be awestruck anymore. Because we've already seen the trailers and what not. But, enough of the ramblings about what's wrong with the industry. If you want to know how the movie is, I'll put it in a single line, so you won't have to go through reading till the end and actually do something productive like getting out there and watching it right away.

The Martian is awesome. Fantastic. Awesometastic.

Well to the ones who stuck around, lemme get in to the details then.
The Martian is a story about a man, Mark Watney (Mark Wahlberg.. la Just kidding. Matt Damon) who is stranded upon Mars after a storm separates him from his crew. Fated to be the single living soul on barren red wasteland. Watney must use his wits and his willpower to make it through  until help arrives.

To put it succinctly, Robinson Crusoe in space. The movie, based on Andy Weir's book was well acclaimed and Scott rightly does justice to it in its visual, such that even the absolutely drab, reddish sepia overtoned planet actually looks beautiful. Imagine that. A single color pallete and yet managing to create a masterpiece. The cinematography is excellent alongside and the visuals alongside the Audio actually makes us believe we are watching Watney's duel against nature. On another planet.

Coming to the script and the acting, everything moves at a crisp pace and never feels slow and Weir's writing is already so sharp, that they needn't have improvised a lot. On acting though, this might be the only movie where each and every character performs an shines. Whether it be Jessica Chastain's (Interstellar, Hurt Locker) strong leadership traits yet underlying pathos or Jeff Daniels' (Dumb and dumber) ... yeah I know, Director of NASA ironically, sense of the greater good and the big picture of the entire institute sometimes might paint him as the typical villain, but it's not so. He masterfully delivers his part as the man who needs to do the right thing and be hated for it. Chiewetel [did I spell that right?] Ejiofor (12 years a slave), who humorously enough, plays a Half Indian incharge of the Mars Program plays his part really well as the man conflicted about the fate of Watney up there. Sean Bean (Game of Thrones, Lord of The Rings) was the one character who really struck me really well though. His sense of idealism and his stubbornness to stick to his beliefs even at the cost of his job, showed a man who'd do anything to not leave a person to die if they can do something about it. Also, the Boromir and the Circle of the Fellowship nod was really well done at a part, and it made me chuckle. LoTR fans, watch out for that one

Kristen Wiig's Annie as a NASA spokeswoman was also well done, with Wiig managing to walk the line of between watching out for the public image for her company as well as wishing to see that a man does not die to it, deftly. The rest of the actors, Sebastian Stan (Cap'n America: Winter Soldier), Kate Mara (House of Cards. And that God awful Fantastic Four movie), Donald Glover (Community) didn't have to much of a role to play, but they did it just as well, except for Mara whom I still find a bit plastic.

The titular Martian, Mark Watney though is the one you should be going to the movie for. Damon blends this infectious mixture of humor, optimism, willpower, resourcefulness and wit in such a way into his character that it's impossible not to root for him. Love him or hate him, you cannot deny that he is one of the finest actors out there in this day and age of Cinema.

To sum it all up. If you've enjoyed Gravity and Interstellar or Apollo 13 or Castaway, you will absolutely love it

And even if you haven't, Mark Watney will still manage to touch your heart. This Martian will resonate with us Humans.
Posted by Penfreak at October 03, 2015