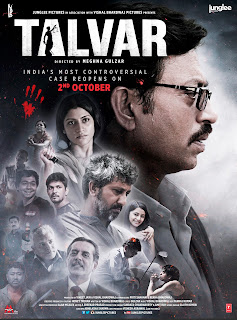 An Intense thriller which shouldn't be missed!!

Based on the 2008 Noida Double Murder case, Talvar is one of the most anticipated movies of the year. Directed by Meghna Gulzar, Talvar promises to deliver an unbiased and clear perspective of the Aarushi-Hemraj murder case. Let's see whether the movie lives up to our expectations or not.

The story has not been tampered with. Tandons' 14 year old daughter is found murdered in her bedroom. Their domestic help is found dead in the terrace. This is followed by a series of investigations- first by the police and then, by the CBI. What happens next will leave you heartbroken and disturbed!

The writing department deserves an applause for portraying the entire incident so effectively. It is quite evident that a lot of research has been done while writing the story. Every minute detail of the case has been incorporated in the script. The best part is that all the aspects of the case have been shown in the film. The screenplay is impeccable. It is crisp and the proceedings have been brilliantly depicted.

Talking about the performances, Irrfan Khan delivers an outstanding performance. He has, once again, proved his worth. He has immense screen presence and performs effortlessly. Konkona Sen Sharma and Neeraj Kabi deliver a decent performance. They look convincing as the parents.

Direction, by Meghna Gulzar is exquisite. She delivers an intense thriller, without losing the emotional appeal. You can actually feel what the characters are going through. To be able to connect with the audience is perhaps, the greatest achievement for a director!

Final Verdict- Don't miss this movie! You will definitely like it!
Posted by Penfreak at October 03, 2015