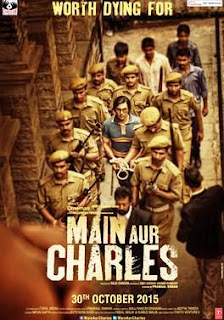 Main aur Charles- A confusing narrative made watchable by some brilliant    performances!

What happens when you ride on a bumpy road, full of potholes? Your entire concentration lies on the road, rather than enjoying the journey. Same is the case with ‘Main aur Charles’! You have to follow the narrative so carefully, that you can’t really enjoy the movie!

Based on the life of the famous serial killer Charles Sobhraj (also known as ‘Bikini Killer’), this movie could have been one of the most gripping crime thrillers of the year! But what it turned out to be, is a confusing, yet stylized narrative, coupled with some brilliant performances.

The movie starts off with Charles (Hooda) planning a jail break in Delhi. He is helped by his inmates, the jailer and a law student, Mira (Chadda). Charles and his inmates escape to Mumbai (Bombay), but Mira and the jailer get caught. The narrative then runs back and forth, showing Charles’ colourful life in Goa, the investigations in Delhi and how he finally gets caught.

The story had the potential to make a gripping and intense crime thriller. But the writers seem to be confused whether to focus on Charles’ life- his intentions and his ways of duping his victims or to focus on the jail-break incident. As a result, they end up creating a half-baked story. The narrative moves back and forth in time, which makes it quite confusing. The screenplay lacks pace and intensity. However, it wasn’t meant to be an intense thriller. Rather, what it lacks in intensity, is made up for by style! It is only towards the climax that you can connect the missing links. There is a plot twist towards the end which has been well thought of. The dialogues have been very well written. They strengthen the narrative and Charles’ character, in particular.

Talking about Charles, Randeep Hooda has been perfectly cast in the titular role! He has the charm and the charisma required to play the character.  His character has been very well written and he does full justice to his role! Not to forget his accent, which matches with Sobhraj’s to a great extent!! Richa Chadda, as Mira, looks a bit unconvincing. She disappoints in certain scenes but overall delivers a decent performance. Her interaction with Kamath, the investigating officer, can be rated as her best scene in the movie! Adil Hussain plays the role of Amod Kamath, the investigating officer. He is just perfect as the disgusted police officer and plays his role brilliantly! Tisca Chopra, as Kamath’s wife, lightens up the film with her screen presence. She makes her presence felt, inspite of a short screentime. Mandini Karimi, as Liz, has almost nothing to perform. She has been cast to add glamour and she does that sincerely! Among the other supporting actors, Sudhakar, the investigating officer from Mumbai, delivers an excellent performance!

The movie boasts of a stylish Cinematography, which was indeed needed to showcase Charles’ life- someone who is known to be a charmer, a hypnotic! The glass scene, shot in the Mumbai hotel and the scenes in Goa, have been brilliantly depicted! They convincingly portray the dark side of the movie. But the same cannot be said about the Editing Department! Certain scenes could have been trimmed down a bit, to add some pace to the movie. The background score is loud at times, but uplifts the movie to a great extent! It makes up for the lack in intensity in the narrative. Among the songs, ‘Neeli Bullet’ would be my pick!

Prawaal Raman’s direction definitely needs some improvement! He portrays Charles life brilliantly and deserves an applause! However when it comes to depicting the jail-break incident, he fails miserably. A scene, which should have been the most intriguing scene of the movie, turns out to be dull and uninteresting! He adds style to each frame, but had he added a bit more pace to the narrative, the movie would have been the best in this genre!


Final Verdict- A must watch for all Randeep Hooda fans! Others, wait for its World Television Premiere!!
Posted by Penfreak at November 01, 2015