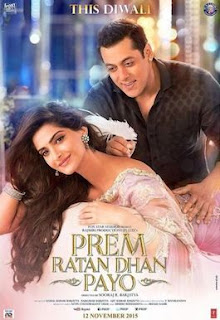 Prem Ratan Dhan Payo- The narrative is as outdated as the title!

Yuvraj Vijay Singh (Salman Khan), the prince of Pitampura, is engaged to Princess Maithili (Sonam Kapoor). He is soon to be crowned as the king. However, his step-brother, Ajay Singh (Neil Nitin Mukesh) eyes the throne. With the help of his manager, Chiraj Singh (Armaan Kohli), he plans an attack on Vijay. Vijay survives, but is seriously injured. Enters Prem, Vijay’s look-alike, who falls in love with Maithili and reaches Pitampura to meet her. He is spotted by Diwan Sahab (Anupam Kher), who gets him to take Vijay’s place, while Vijay is kept for recovery in a safehouse. The rest of the journey shows Prem’s journey in the Royal Family, his love for Maithili and how he unites the entire family together. (SPOILER ALERT- Click here to read the entire story)

Rajshri Productions seems to be stuck in the 90s. An outdated narrative, a weak plot, poor characterization- this is what best describes the film! Also, it is not like the other Barjatiya films- it focuses more on silly twists and turns, rather than showcasing the sweet family drama, which is a trademark of Rajshri Productions. The screenplay is too sluggish and slow-paced.  As if this wasn’t enough, the film is loaded with dollops of songs, which slows down the pace even more! The film offers only a few sweet moments. The romance between Maithili and Prem has been well directed, but their chemistry fails to impress. The worst part of the movie is the stretched climax, which is extremely boring! The dialogues are too clichéd. But for a movie whose title is ‘Prem Ratan Dhan Payo’, you can’t expect anything better!

Salman Khan has nothing new to offer with his performance. Out of the two character that he plays, I would rate Prem as the better one. But this Prem is not as good as the Prem of the 90’s! Salman has the charm and the charisma required to play the character, but his acting skills need fine tuning. Sonam Kapoor delivers an average performance. Swara Bhaskar, otherwise a fine actor, is let down by a poorly written character. Neil Nitin Mukesh has been miscast as Ajay Singh. His dialogue delivery is extremely annoying and he remains blank-faced throughout. Armaan Kohli delivers a robotic performance. It seems as if he is still suffering from the hangover of his previous film, ‘Jaani Dushman- Ek anokhi Kahaani’! Anupam Kher performs well in whatever little screentime he gets.

The movie is magnificient in terms of sets and costumes. While some scenes have been brilliantly portrayed, others needed a lot of improvement. The movie has a run-time of almost 3 hours, which could have been easily overcome with some fine editing. The soundtrack of the movie is certainly disappointing and none of the songs manage to impress.

Director Sooraj R. Barjatiya fails to deliver an entertaining family movie this time. He relies heavily on his male lead, rather than focusing on the script and the screenplay. He fails to recreate the magic that he had done with ‘Hum Aapke Hain Kaun’. Not a great comeback, Mr. Barjatiya!


Final Verdict- Might appeal to the family audiences and die-hard Sallu fans. Others, stay at home and save your ‘dhan’ this weekend!
Posted by Penfreak at November 15, 2015