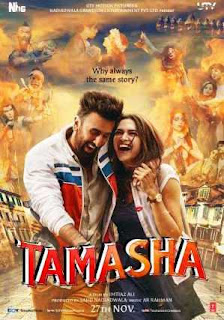 Tamasha- A beautifully crafted narrative uplifted by some brilliant performances!


Direction- Imtiaz Ali
Verdict- 3.5 / 5
Every child is fascinated by stories, isn't it? Some simply listen to these stories, others live it! Tamasha depicts the journey of one such child- his aspirations, his love-life and the inner conflict that he faces. Will it be able to strike the right chord with the audiences? Let's find out.

The movie depicts the journey of a free-spirited Vedwardhan Sahni (Kapoor), who since childhood is enchanted by stories. Years later in Corsica, he meets Tara Maheshwari (Deepika), a tourist who has lost all her belongings. Soon they bond up with each other, but decide not to reveal their true identity (coz what happens in Corsica, stays in Corsica!). Her one-week stay in Corsica brings Tara close to Ved. She starts missing him after returning from Corsica. But a few years later, faith brings them together once again in Delhi. The rest of the story deals with the
complications they face in their relationship, Ved’s inner conflict and how they manage to tackle these odds!

Imtiaz Ali showcases a simple story in an extraordinary manner. It is not merely a love story- it is about realizing your dreams and pursuing your passion. Many of us dream, but only a few of us dare to do it. And then one day, somebody makes us realize what our passion is. It deals with the social stigma of go-with-the-flow, rather than pursuing something different and ‘hatke’! The writing department deserves an applause for penning a script, which is so regular, yet so different! The screenplay has been brilliantly written and is quite different from the rest of the movies of this genre. It is medium paced, but never loses the grip. Infact, this is what forms the soul of the movie! The first half is chirpy and it gives the feeling of a ‘rom-com’. But it is only towards the second half that you realize that this movie has much more to it than just romance! The concept of storytelling works quite well to showcase the mindset of a nine-year old. Also, the repetition of certain scenes seems to be perfect to depict his monotonous life as a ‘Product Manager’. The second half is loaded with emotions, which have been layered perfectly to suit the mood of the movie. The post break-up scene is the most heart-touching scene of the movie. But certain scenes seem to be exaggerated and that’s disappointing! Apart from that, other aspects of screenplay seem to be alright! Dialogues are utterly suitable to depict a regular conversation and work in favour of the movie!

After the debacle of ‘Roy’ and ‘Bombay Velvet’, Ranbir Kapoor is back with a bang! A natural performer, Ranbir simply nails it this time! He performs extremely well and does full justice to his role. It would be difficult to judge any scene as his best. Deepika Padukone is perhaps, the perfect choice for Tara Maheshwari! She delivers an outstanding performance this time! She has a great emotional appeal and her chemistry with her ex-flame is just sizzling! Javed Sheikh, as Ranbir’s father performs well in whatever screen time he gets. Vivek Mushran, as Ranbir’s boss performs well and adds to the humour quotient. Other actors lend their support quite well!!

The Cinematography by Ravi Varman is impeccable! The scenes in Corsico have been brilliantly shot! Varman succeeds in capturing the mood of the film quite well, with just the perfect amount of lighting in all the scenes! Aarti Bajaj’s editing deserves a special mention. In a movie like this, where editing could’ve gone horribly wrong, Bajaj manages to depict every scene with just the perfect cuts and trims! The soundtrack by A.R. Rahman complements the mood of the movie! ‘Matargashti’ stands out among the rest!

Imtiaz Ali’s direction is good but not perfect. He paints his canvas with the colour of emotions and that’s applaudable! But the film lacks mass-appeal. Otherwise, the film scores well in all other aspects!

Final Verdict- A must watch for all RK-Deepika fans! Might not appeal to the masses!