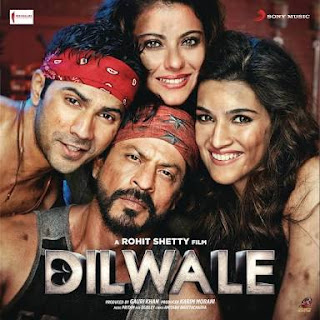 SRK-Kajol jodi, fancy cars, heart pounding action, and adding to that SRK's only movie of the year.Will Dilwale live up to its hype? Read on to find out

Raj (Shah Rukh Khan) alias Kali is a gangster-turned- garage owner who has moved on from his previous life. His brother, Veer (Varun Dhawan) is a sweet-natured flirt who falls in love with Ishita (Kriti Sanon). Soon, Veer and Ishita develop feelings for each other and decide to tell their families about their relationship. Raj, on seeing their love, accepts their relationship and decides to talk to Ishita’s family. Upon entering Ishita’s house, Raj encounters Meera (Kajol) which opens up old wounds. Both Raj and Meera refuse to accept Veer and Ishita's relationship and tell them to stay away from each other. What is the history between Raj and Meera? Will Veer and Ishita's love prevail? Watch the movie to find out

Shah Rukh Khan gives a great performance here. His eyes can really convey a lot of emotions. He really is head and shoulders above the rest when it comes to romance. Kajol gives a good performance here although she has done better in the past. She looks more gorgeous than ever before. The SRK-Kajol Jodi is still capable of kindling up a fire. They truly share a great chemistry between them. Varun Dhawan is the star of the show. He has grown leaps and bounds and is truly an actor to watch out for in the future. Kriti Sanon is however, unconvincing. She looks a bit out of place here.

The direction is okay. Although the film is a little slow in the first half, its pace picks up in the second. The one-liners are rib-tickling and some scenes are really hilarious which keeps the viewers entertained throughout. The 5 minute date scene between SRK and Kajol and the scene in which Varun proposes to Kriti stays with you even after the movie. The locations are beautifully captured. The story however, is the main drawback. It is very predictable and has many loopholes. The lack of a credible antagonist also hurts the film’s cause. The ending is a bit of an anticlimax. The music by Pritam is decent with Gerua being the highlight.


Final verdict- The film is a must match for die-hard SRK fans. Others can give it a try.
Posted by Penfreak at December 19, 2015