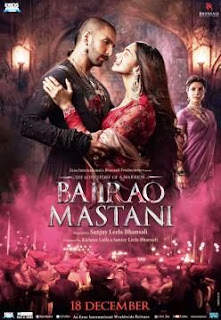 Bajirao Mastani- Overloaded with Extravagance, but let-down by a slow-paced screenplay!


It is easy to fight your enemies, but equally tough to stand against your loved-ones! This line is, in itself, enough to explain the premise of ‘Bajirao Mastani’. Directed by Bhansali, this movie has created much pre-release hype. Will it be able to live upto our expectations? Let’s find out.

Peshwa Bajirao (Ranveer Singh) takes over the throne as the new Maratha Warrior. He is said to be insurmountable - courtesy, his wife Kashi (Priyanka Chopra), in whom he finds his strength. However, things change when Mastani (Deepika Padukone), daughter of the King of Bundelkhand, seeks his help in saving Bundelkhand. Soon, Bajirao and Mastani fall for each other. But due to religious differences, Mastani is not accepted by Bajirao’s family. Will ‘Love’ be able to overcome the barriers of ‘Religion’? This is what the rest of the story is about!

Based on the life of the famous Maratha Warrior, Peshwa Bajirao, this movie had the potential to be the best historical drama, ever produced in India. But inspite of an engrossing storyline, the movie is let down by a not-so-strong screenplay! The story focuses mainly on Bajirao’s love-life, amidst the backdrop of a historical drama. It delivers an astounding message, without actually exhorting about it. But the problem lies with the screenplay, which is somewhat flawed! It loses pace at parts and seems to be engulfed in its own grandeur! Certain developments have not been reasoned properly and in certain parts, the narrative remains shallow. However, it is not that bad either! Infact, certain scenes have been resplendently written. The climax is perhaps, the most heart-wrenching scene.  The dialogues seem to be perfect for a historical film and work in favour of the film.

‘Bajirao Mastani’ boasts of some of the finest performances of the year! Ranveer Singh, as Bajirao, does full justice to his character. While in certain scenes, he acts more like ‘Ram’ of ‘Ramleela’, rather than ‘Bajirao’, in other sequences (particularly the war scenes), he shines! Mastani, played by Deepika Padukone, steals the show! She fits into the skin of the character and portrays her character brilliantly. With every film, she keeps on getting better and better! This one can be said to be her best performance till date. Priyanka Chopra delivers a stellar performance, inspite of a lesser screen space! She has a couple of strong moments in the film. Tanvi Azmi, as Bajirao’s  mother is absolutely convincing. Other actors are equally impressive!

The movie is exquisite in terms of the sets and costumes, something which Sanjay Leela Bhansali is known for. Ostentatious sets and gorgeous costumes (by Anju Modi)  add to the grandeur and enhance the cinematographic aspect of the film! All the scenes have been vividly shot, with the ample use of CGI. Fine editing makes the movie a visual spectacle! However, the film’s music seems to be a bit unimpressive, with only ‘Deewani Mastani’ leaving a mark!

Director Sanjay Leela Bhansali does a sincere effort this time. Bajirao Mastani is one of his finest works till date! With a more gripping screenplay, the movie could have been a masterpiece. Nevertheless, the movie definitely deserves to be seen!


Final Verdict- Watch it out for some outstanding performances and Bhansali’s excellent direction!
Posted by Penfreak at December 19, 2015