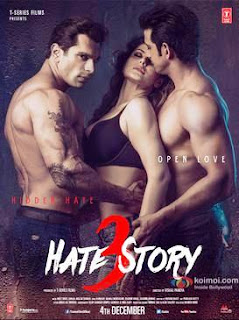 Sex sells. It really does! The trailer of Hate Story 3 is, in itself, enough to prove this point. The trailer, which received more than a million views in just a few days, was well-appreciated by the audiences. Does the movie live upto our expectations? Well, the answer is definitely a ‘no’!

The movie starts off with Aditya Diwan (Sharman Joshi), a Mumbai-based industrialist, inaugurating a multi-speciality hospital, as a tribute to his deceased brother, Vikram Diwan (Priyanshu Chatterji). He is married to Sia (Zareen Khan). But his entire world turns upside down when Saurav Singhania (Karan Singh Grover) enters his life. He proposes to pay him any amount of money in return for letting Sia sleep with him. With the help of his employee, Kaya (Daisy), Aditya tries to find out Saurav's motive. Will Aditya accept this proposal? Will he be able to find out Saurav’s motive? The rest of the movie answers these questions


The story had the potential to make a good film, but it has been stuffed with a lot of unrealistic elements and unexplained circumstances, which makes it quite unbelievable. It looks like a mashup of ‘Indecent Proposals’, ‘Race’ and a few episodes of any TV soap- plastic surgery, a plane crash survivor, and what not! But yes, the movie does provide certain twists and turns, which have been brilliantly thought of (or copied, for that purpose)! When it comes to suspense, the movie does provide a lot more than the previous two installments. Only if they had been executed well, the movie would have been better! All those who are wondering whether the intimate scenes have been retained or not (considering the ‘sanskarism’ of our censor board), do not worry! The movie has dozens of intimate shower and bedroom scenes. However, the major disappointment in the movie is the screenplay, which has been very lazily written. There is no proper characterization and no depth in the plot. On top of that, the movie is filled with (irritating) songs, which interrupt its pace drastically! It is only towards the second half that the movie gains some pace. The dialogues are cheesy and filled with ‘F’-words, which will definitely appeal to the masses!

The ‘Hate Story’ franchisee is known for two things- intimate scenes and bold performances (especially, by the female lead). But this one is a major letdown in terms of performances! Zareen Khan delivers a decent but over-the-top performance. Even her skin show couldn’t compensate for her poor acting skills! Daisy Shah delivers a performance, which can put even Uday Chopra to shame! She desperately needs some acting classes! Sarcastically, in one of the scenes, Karan Singh Grover tells her, “Tumhe actor banna chahiye”!! Sharman Joshi is perhaps, the only saving grace of the movie! He acts well, in a half-baked role. Karan Singh Grover has shown a lot of improvement since his previous release, ‘Alone’.  He should focus more on his acting skills, rather than his physique. Priyanshu Chatterji, in a brief role, lends good support to other actors!

Inspite of a lot of flaws in the screenplay, the movie does keep you glued- thanks to the editing team. All the scenes are sharp and well shot. The camera-work has been well handled to capture the scenes, especially the top-angle view, which is extremely important for an erotica (pun intended)! The background music works perfectly in accordance with the film’s theme. The soundtrack doesn’t boast of any great number, apart from ‘Tumhe Apna Banane Ka’.  Other songs simply interrupt the film’s pace!

Vishal Pandya’s direction is certainly flawed. He needs to learn a lot from Vivek Agnihotri (director of the first installment of Hate Story), who displayed so much finesse in depicting a relatively simpler plot so brilliantly! He could have given a bit more attention to the screenplay and in extracting a little more from his actors. Certainly, not upto the mark!


Final Verdict- Watch it only if you are a hardcore fan of this series. Otherwise, just give it a miss!
Posted by Penfreak at December 05, 2015