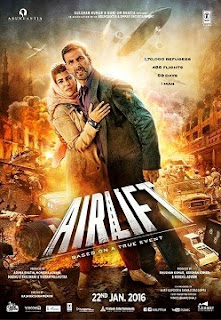 Verdict- 4.5/5
2016 seems to be a Golden Year for Bollywood. With movies like Wazir, Chalk ‘n’ Duster and many more releases lined up this year, Bollywood seems to be marching more towards content-driven cinema rather the regular ‘masaledaar’ Bollywood crap! And adding to that list, we have a movie which redefines the way thrillers are perceived in Bollywood, a movie called ‘Airlift’!

Airlift, one of the highly anticipated movies of 2016, hits the theatres on January 22. Based on India’s Rescue Operation of its Citizens from War-torn Kuwait in 1990, this film promises to be an enthralling affair! Does it live upto its expectations?

Ranjit Katyal (Akshay Kumar) is a Kuwait-based Entrepreneur who lives with his wife, Amrita (Nimrat Kaur) and daughter (Abida Hussain). His life turns upside down when Kuwait gets invaded by Iraqi forces under the leadership of Saddam Hussain. The rest of the story is about Ranjit’s quest to safely evacuate the Indian Citizens of Kuwait and whether he succeeds in it or not.

Airlift’s biggest strength is its riveting screenplay. Raja Krishna Menon does a great job by making the film neither too commercial nor too artistic, which works completely in the film’s favour. The pace is well maintained throughout the film and Menon gives it a touch of realism, which is worth applauding!

Akshay Kumar delivers a stellar performance. He gets into the flesh of the character and adds life to each and every scene. It is hard to imagine anyone else perform this role with such intensity. Clearly, an award winning performance it is! Nimrat Kaur, as Ranjit’s wife, performs at par with Akshay. Despite being just two films old (Peddlers and The Lunchbox), she performs like a seasoned actor. Her altercation with Prakash Belawadi truly deserves applause. Purab Kohli and Prakash Belawadi put up a great performance and portray their characters brilliantly!

Cinematography by Priya Seth (Yes, a female cinematographer in Bollywood after a long time!), deserves a special mention. She successfully portrays the dark shades in her canvas and gives us some great shots! She adds intensity in this thriller-drama and captures every moment perfectly. Editing is crisp and helps to maintain the pace better! Background score builds up the much-needed tension in the film.

Raja Krishna Menon’s direction is accreditable. His understanding of the subject matter and translation of the same on the big screen is commendable! Hope to see more of his works in the years to come!

Final Verdict- Just go for it. You won’t be disappointed!