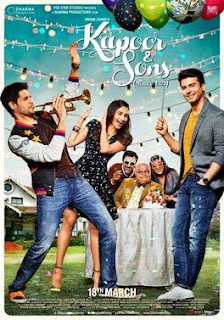 Kapoor & Sons - A mature drama, blazoned with only some flavors of a typical kJo movie!


In 2001, the overwhelming success of 'Kabhi Khushi Kabhi Gham' was a feather in the cap for Karan Johar. Cut to 2016 and we are presented with 'Kapoor & Sons', a modern saga of dysfunctional families, from the house of Dharma Productions. But is the movie worth all the hype?

Rahul (Fawad), a successful writer and Arjun (Sid), a struggling writer who works as a bartender, are brothers who return to their home in Coonor, upon hearing about their grandfather's (Rishi Kapoor) ill-health. However, things take a toll when they fall for the same girl, Tia (Alia). Amidst all the tension unraveling in the family- marriage issues between the parents (Ratna Pathak Shah and Rajat Kapoor), sexuality issues- will the Kapoor brothers be able to fulfill their grandfather's last wish- to click a family photograph with the title, 'Kapoor & Sons (since 1921)'?

The movie's asset is its narrative and an ensemble cast, which shows immense promise. Not to forget the precise characterization, which gives layers to each character. Such is the treatment of the plot that despite a simple predictable storyline, the movie doesn't give us a single moment to keep our eyes off the screen. The movie builds up on a great note and runs with a brisk pace. Each character has its own dark secrets, which unfold meticulously on screen and strengthen the proceedings. Unlike other Dharma films, this one is not totally a 'feel good' film, decorated with lustrous canvasses. However, it is not completely disgruntled, either!

Amidst all these comes the chartbuster 'Kar Gayi Chull', which has been scrupulously embodied in the film, without hagridding the pace!

Retrospecting the performances, among an ensemble case, is not a facile task. All the actors have performed exceptionally well, but the film actually belongs to Rishi Kapoor, Ratna Pathak Shah and Fawad Khan, who steal the show. Rishi Kapoor gets into the flesh of the character and this is clearly his most indelible renditions till date. Ratna Pathak Shah is an absolute delight to watch; her portrayal of a jealous wife will definitely be adorned by the spectators. Fawad Khan proves it once again that he is not just a 'face' to look out for. His acting prowess will inarguably augment his fan following by leaps and bounds. Sidharth Malhotra has improvised a lot since his previous films. He understands the gravity of his character and performs at par with his co-stars. Alia Bhatt, who is at the pinnacle of her career, adds one more gem to her kitty of films. She looks natural and shares a great chemistry with both Fawad and Sidharth. Rajat Kapoor and other actors pull off their respective parts with great zeal.

Cinematography is not typical of other Dharma films, but perhaps that was needed to illustrate this modern saga of dysfunctional families and to match up to the urbanised approach of storytelling. The movie has been well edited, disallowing any unwanted scenes and keeping the pace strictly in-check.

Shakun Batra's direction (of 'Ek Main aur Ek Tu' fame) is truly marvelous. His approach towards modern storytelling is something to look out for. Hope to see more of his works in the years to come!

Final Verdict- A 'Pre-Holi' treat by Bollywood. You will definitely enjoy this quirky tale!
Posted by Penfreak at March 20, 2016