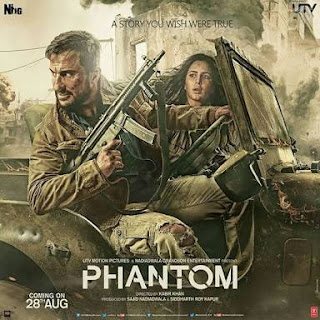 
After delivering a blockbuster, 'Bajrangi Bhaijaan', Kabir Khan is back with an edge of the seat political thriller, 'Phantom'. But does he live up to our expectations this time? Lets find out.

Based on the 26/11 Mumbai Terror attacks, Phantom is the story of an ex-army officer, Daniyal Khan (Saif), who is hired by RAW for a mission to wipe out the terrorists involved in the terror attacks. He is made to meet, Nawaz Mistry (Katrina), an ex-RAW agent, who now works as an arms supplier and security counsellor in refugee camps. But do they succeed in their mission?

Talking about the story, Phantom boasts of a powerful story and it is quite impressive. However, a good script is let down by a horrible screenplay. The plot establishment is very poor and the proceedings are quite haphazard in the first half of the film. As a result, the first half doesn't hold our interest and the movie loses its grip. It is only towards the second half that the movie builds up some pace. Certain scenes lack logic and the climax is over dramatised but that is how our Bollywood movies are meant to be!! Overall, the film has a very weak screenplay.

Talking about the performances, Saif and Katrina simply fail to impress. Saif, as Daniyal, tries hard to act but is not so convincing. His performance is just average. Katrina proves it again that she is quite overrated. Her performance is below average and her dialogue delivery seems to be forced. The supporting actors, however, perform much better than the lead actors.

Direction by Kabir Khan is above average. Action sequences are average- some scenes are intense and thrilling, while others are boring. Cinematography is good. Editing is good, but could have been a bit sharper. Other technical aspects are good.


Final Verdict- Overall, the movie fails to impress!! Watch it if you have nothing else to do this weekend.
Posted by Penfreak at September 18, 2015