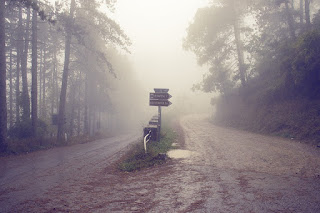 Two big drops of tear ran through her chubby cheeks, as if the frozen eyes of all time insisted to swell. It was always at the edge of her eyes but failed to take a journey down.Fagged by her churlish and weird ways her mom yelled her anger out today and banged the door hardly on her.

The situation was so very messed up that a girl who was proud to be an asset of her family was now with a drooping attitude. Every thing in her vicinity was so vibrantly colored yet too dreary. It wasn't that recent , this frustration haunted her since a month. Ask a person with the same grip of fear as in Rhea, they will explain you a whole month or let it be exaggerated to 25,92,000 seconds is far more than what it mean to us.

Rhea, glared at the sharp edge of the knife and almost decided to split her vein that ran with full gusto unaware of her sufferings. Unknowingly she was taken aback to the lane of memories years back,as if the chronicle of her life came as a flashback to her moistened eyes.

........' Among all its contemporary mates that sums up to 200-300 million , the sperm swam and swam to reach the ova and win it over' That's life indeed, since then competition starts!! Well that was a predicted scenario inside her mother's womb and outside...' everybody was eagerly waiting for the most celebrated moment of their life. Her grandma panicked as the pink lace didn't compliment the red sweater that she knitted skipping her meals . Tired of her regular check-up and the strict meals Rhea’s mom literally begged the conclusion of of the 9th month . Down the stairs faintly could be heard the voice of the house keeper dealing with the new furniture meant for the baby. And finally after a couple of days she was born to the hubris of the well known ‘Arora family ’.indeed it was the day she was stamped as an earth-link in her forehead!! Her mom gazed at her genially while rocking the cradle and with the blink of eyes , Rhea grew up to a girl chasing the butterflies of her life from a child habituated of dandling in her father’s sky touching arms, tuning the lullaby. All such pre and postnatal events were her grandma’s oratory blessings that she always fantasied of during her bed-time being a toddler.
By now the so-called “Bonfire” of her anger mellowed down and she loosened the grip of that deadly knife. She stole a glimpse of the dim lit room and caught a sight of the poster hung leisurely stating “I love myself”…..‘Oh, what an irony she thought’ . Tangled in the web of life she can’t take it for granted such plain ideas of any god-forsaken doctor to hang a bill board in your room that you love yourself, even if you don’t! You all can well imagine the insecurities of a 19th old who have got the iffiest career ahead . Her life twisted to its best when the results were out for an entrance examination to a medical college. Though bit obnoxious to mention here but quite obvious by all of your’s thought, she didn’t cracked in through, yes so does a number of aspirants every year…and hence now solitude tempts her more, being in the bosom of mass she was all alone.

The air was clear today, wasn’t that gloomy and she was also in a normal temperament… she was musing, then a guffaw disturbed her and she went downstairs to complete some of her daily chores and to her surprise she encountered the pot-belly, next door woman Mrs. Mehta sipping leisurely the lemon tea offered to her. Before Rhea could afford to avoid her , the high nosed woman questioned- ‘ So girl what are you up to now?” Rhea pretended to be as normal as possible and replied ‘‘Let’s see what luck is upto aunty” and retired from the living room gently. The woman was soured by Rhea’s reply, it seemed as if she framed an answer in her mind itself and expected Rhea to answer so.” Our ill fate “ ,Rhea’s mom explained however Rhea didn’t bother to lend an ear. She thought” How can mom entertain such woman who scrounge fun in other’s pain” Nothing got into her nerves until her exhortative father rang over and the maid in a single breathe or so came running to Rhea and a hoarse voice flowed in “ Look Rhea I’m well informed of your sick behavior, Buck up!! Why don’t you accept the truth and move on, go on with your admissions in other colleges or come over here...u’ll surely get in with such a brilliant boards marks………and he carried so on, while in the meantime Rhea doodled with the pen in her notebook and dourly stared at the frills of the curtain. She was almost at the verge of losing a tear of no cause…however back from the black velvety frills she was somehow drawn to the conversation and her dad concluded “ Don’t dare to spoil the fame of my family, It’s my pride or else I won’t spare you” .His last words echoed in her ears , she thought how can Dad speak such harsh words, he is least bothered about my career all that matter to him is his ‘fame’
The last noted scene was that, the most treasured antique piece of kettle smashed in the floor and Rhea literally bawled,  "I’m a felon, I must die" By now her mom came running to that site, Mrs. Mehta followed her and the maid who was a silent observer all this time explained her the incident with much of her own spice. Mrs Mehta quoted “ A prophet you know, Mrs Arora in sector 26, he can handle her” Rhea’s mom was all drenched with shame and she nimbly followed Rhea to her room and discovered Rhea meditating in the crimsom painted wall and continued “ He was your Dad, you’ve lost it” and slapped the door with all her strength.

The girl flowed all her frustrations that day, the gale of failure that approached her sagged and her inner self rekindled. She realized, that wasn’t her. She owe her parent’s more than her life . Her feisty eyes sparkled behind the tears, and she made her mind to do her bachelor’s from Delhi and enshrine the fame of her family at any cost . Her fist loosened and the sharp knife appeared too “blunt’’ and fell of her hand. The amiable doctor gaited the stairs up being informed of her gaffe, assuming that Rhea must have terminated her medications and found Rhea lying in the nook of her room .Before he could start his sermonize she spoke “ I’m fine uncle, mom just panics a lot” The girl worn out by this stormy phase of life now had a glint of determination . The doctor sensed the change in her and announced ‘‘There is no need for worry , because the prospect of trouble seems light” and he punctuated with a gentle smile. Rhea briefed “ Uncle please do cancel all my following appointments with you as by now I love myself!!”
‘‘Life may seem a terrifying cliff, with unfulfilled dreams… appealing a mighty jump from its edge but trust me there’s a world behind one’s dream, promising joy and success by the time it unfolds …so medics its your time to chase the bliss. Be the next Rhea!!’’ Dr.Sharma punctuated again with a gentle smile and closed his diary after narrating Rhea’s episode from the podium, he tried hard to fight the lump in his throat and it was so tough though in that counseling seminar meant for students seeking medication in his clinic, as in Rhea did 7 Years back…..a big round of applause echoed in the hall. The curtains fell down, yes the same velvety ones with frills all over but the air prevailing now is poles apart as in it was years back, at Rhea’s place.
Posted by Penfreak at September 19, 2015