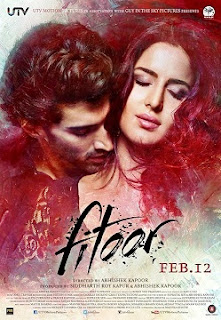 Fitoor- A Visually Captivating affair, but not upto the mark!

Cast- Tabu, Aditya Roy Kapur, Katrina Kaif, Lara Dutt, Rahul Bhat, Aditi Rao Hydari, Akshay Oberoi, Ajay Devgn
Direction- Abhishek Kapoor
Verdict- 3/5
“There is never a time or place for true love. It happens accidentally, in a heartbeat, in a single flashing, throbbing moment.” The makers of Fitoor seem to have established this fact brilliantly in the first few frames. But what happens thereafter is a complex chain of events which leaves the viewers confused, frustrated and finally uninterested!

Young Noor (Mohammad Abrar) falls in love with Firdaus (Tunisha Sharma) at first sight. However, fate separates them when Firdaus is sent to London by her mother, Begum (Tabu). Few years later, a grown-up Noor (Aditya Roy Kapoor) moves to Delhi to pursue his artistic career, where he meets Firdaus (Katrina). He gets closer to Firdaus, only to realize that she is already engaged to Bilal (Rahul Bhat). Will Firdaus reciprocate her love for Noor?

Based on Charles Dickens’ novel Great Expectations, Fitoor had the potential to be an intense and interesting love story. Yes, it starts off on a great note but loses steam midway and becomes clumsy towards the end. The screenplay loses its pace at parts and becomes somewhat unconvincing towards the end. The introduction of too many sub-plots and plot twists seems to be unnecessary. Begum’s back-story tends to disrupt the build-up to the climax. The movie boasts of some high-voltage Dialoguebaazi, which does no good to the film!

Katrina Kaif looks stunning as Firdous and doesn’t disappoint with her performance. Aditya Roy Kapur does full justice to his character and he performs with utmost sincerity. His chemistry with Katrina is something to watch out for. However, the film actually belongs to Tabu, who delivers a stellar performance! She steals the show with her terrific performance, especially in the pre-climax scene. Young Noor and Firdaus, played by Mohammad Abrar and Tunisha Sharma respectively, deliver a phenomenal performance. Lara Dutt, as the curator and Rahul Bhat, as Bilal seem to be wasted in this movie. Ajay Devgn’s cameo is impressive. Aditi Rao Hydari, as the Young Begum, lends good support to the star-cast, inspite of her voice being dubbed by Tabu. Akshay Oberoi has almost nothing to perform in this movie!

However, the real hero of the movie is its cinematographer, Anay Goswamy, who manages to grasp our attention with his startling camera-work. The astounding visuals of Kashmir, the breath-taking scenes of Dal Lake make the first half of the film, a visual delight! He imparts an artistic touch to each and every frame and makes the film look extremely beautiful!

Director Abhishek Kapoor is known to have a class-appeal but this time, it backfires! He tries to stay true to each and every detail of the book, but in the process creates too many unnecessary plot-twists, getting entangled in its own web. Coz what looks good on paper, doesn’t always translate into a good film!


Final Verdict- Watch it if you are a die-hard Katrina-Aditya fan or you have nothing else to do this Valentine’s Day!
Posted by Penfreak at February 14, 2016