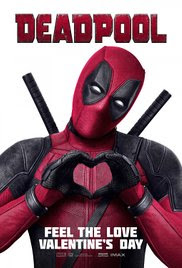 A superhero movie has never been funnier than "Deadpool." Or more outlandish – or obscene. That should come as quite a relief to fans of Marvel Comics' “Merc with a Mouth” anti-hero and especially Ryan Reynolds, who labored a long time to get Deadpool's his own solo adventure on the big screen, a process that entailed – according to Deadpool, at least – fondling 20th Century Fox's prized asset whose name "rhymes with Pullverine."

Deadpool is one of the very few characters in the Marvel universe that can break the fourth wall,making pop culture references, and slicing up bad guys and is self aware. And the movie really got because it is rife with meta-humour which can be seen in the very beginning with the best opening credits scene ever.

The action scenes are also a lot of fun. From the sword fighting, to the shooting, to the acrobatics, they were all filmed really well. It delivers on the violence too, which is cartoonish enough but it doesn't go too much into Blade territory. As touted during the opening credits, “the real heroes here” are writers Rhett Reese and Paul Wernick (ZOMBIELAND). While the narrative is a fairly straight-forward origin story, even with its use of flashbacks to add interest, the spark that ignites is found within their insanely snappy, witty dialogue. They even blessedly get in a few jabs at X-MEN ORIGINS: WOLVERINE and GREEN LANTERN.
The story is quite simple here. Its a love and revenge story. It is well paced though as it is told in a non-linear style.

This movie is so refreshing. I thought I was too jaded by superhero films but when you pick the right character to adapt, you can have so much fun with him or her. Deadpool brought us something different and it was awesome.

I had little interest of watching it in theatres but with the marketing team releasing all the crazy, cool lame posters got my attention. And i am thankful to them.

You come to a movie like Deadpool for the comedy and action, but you get swept up in the love, the horror and the drama, ending up with quite a well rounded flick. In fact, it's one of the heftiest superhero origin stories told on film in recent years. This is a dessert with something for everyone to enjoy. But please, do not bring your children to see this movie.

P.S. Its a Marvel movie, so don't just leave the theatre after the movie. Wait for the end credit scene. Its Hillarious.