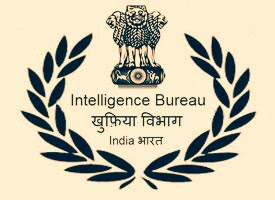 Primarily responsible for gathering information regarding any anti-national activities, these are highly trained professionals who are masters of their trade - who know  how to penetrate a community, militant organization etc by cultivating sources/ contacts, how to use secret methods of surveillance, how to disguise and track a suspect, how to perform counter intelligence and how to diffuse tensions in a community, all these without revealing their identity.

It is the most vital arm for collecting information and performing intelligence assessment of the government. Counter insurgency and counter terrorism measures are devised on the basis of informations provided by the Intelligence Bureau.

A brief History
1887: Reputed as the Worlds oldest intelligence Agency, IB was formed by the British Government to counter check Russian advances in Afghanistan, fearing a Russian invasion to British India.

1909: A state run survelliance and monitoring agency the Indian Political Intelligence Office, was established in England in response to the development of Indian revolutionary activities.

1947: It was recast as ‘Central Intelligence Bureau’ under the Ministry Of Home Affairs.

1968: Research & Analysis Wing (R&AW) was formed as a split up of IB, and dedicated to foreign intelligence, it had played a major role in independence of Bangladesh and accession of Sikkim.

2017: Rajeev Jain took over as charge of ‘Director OfIntelligence Bureau’ from Dineshwar Sharma.

Shrouded in secrecy the IB has by and large been a very successful organization,though  the operations carried out are hardly declassified. Until the fall of the Soviet Union, IB personnel’s were trained by Soviet KGB. IB has its own email spying system and is allowed to tap phones of suspects, Since India has a federal structure and the report given by states can be biased, the reports given by IB are taken as gospel truth. IB does not has a chartered of duties so any ministry can ask for its help to perform whatever duty it wishes. IB provides an opportunity to directly work for the nations interest, there is no other organization that will let one enhance ones knowledge regarding aspects of human life, political atmosphere, social environment, religious strife, terrorism or even economics, and all this while working in anonymity, away from the public and medias  glare.  Many blame the Intelligence failure for terrorist strikes in Mumbai, but the facts remain for everyone to see that Delhi failed to read situation reports which came from IB’S Outpost.

How to be an IB agent (the real spykid):
According to data made available to the parliament, IB has a shortfall of 8,000 personels, so massive recruitment opportunity has come up.

The younger generation has shown a keen interest to join the premier spy agency, and the latest recruits includes B.Tech students, MBA graduates and many more who have left their high paid job to learn the “Tradecrafts” of Intelligence gathering.

There are three ways of getting recruited in IB
1)   Give the Examination of ACIO, (Assistant Central Intelligence Officer), a non gazzeted post, get selected and after subsequent promotion one  becomes DCIO(Deputy Central Intelligence Officer), a gazzeted post.
2) Give UPSC- Civil Service Examination, get a good rank enough to become an IPS officer, serve in your allocated cadre for sometime and then go to IB on probation.

3) Give the Examination of SA(Security Assistant) organized by M.H.A


i). Director of Intelligence Bureau, is the highest post that any IPS officer can achieve. It is over and above the post of DGP. He is the member of JIC (joint Intelligence Comission)and Steering Committee that briefs the Prime Minister regarding the intelligence inputs.

iii). In the states IB units are designated as SIB (Subsidary Intelligence Bureau) and headed by an zonal Additional Director with the Joint Director.

IB in movies
Unlike its daughter organization R&AW, IB has not been able to capture a bulk of the cine space, this is primarily due to the extreme secretive nature of its functioning. Some movies like ‘Bad aurbadnaam’, Mukhbir, Kahani, did feature this premier spy agency.


Every country has its own intelligence agencies whose basic purpose is to monitor development within and out of the country that may have reference or impact to governance of the nation.They don’t have the police powers so they have to work covertly and using their wits and tact, often risking their own lives. Intelligence is a perpetual war of silence machinization. Every posting as a intelligence officer is unpredictable as each district has its  own source of political and social problem. India has a list of central agencies who work parallely and coordinate with each other in the nations interest. Amongst them IB stands tall, away from the public and media glare, these heroes risk their lives in the most adverse of conditions, so that the  life of each one of us remains safer and better.