Befikre: Unorthodoxy is the new elixir of life 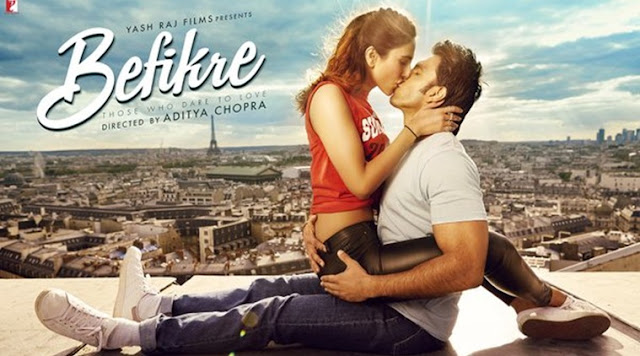 The Ranveer Singh-Vani Kapoor starrer was the much hyped release of the month. With this calender year nearing its end, this film was believed to offer a new lease of life to filmmaking here in India. Expectations were running high as this was Aditya Chopra’s return to a directorial venture 8 years later after his cult worthy DDLJ and Mohabattein. Does the movie live upto the expectations or just turns out to be a lip-locking spree…

Dharam (Ranveer) the Delhi-da-munda is the fun-loving, charming, witty dude who goes to Paris to work as a stand-up-comedian in his friend’s Delhi Belly Bar. He hopes of living the Indian dream. Partying, hoseying around, picking up on hot chics while earning a few bucks down the road. It happens one day that while being in a rave party, after numerous failed attempts to pick-up French girls, his eyes finally find Shyra (Vani). He is smitten with lust. He walks upto her and uses his witty pick-up lines while being absolutely honest about his failed attempts to hit on girls and that Shyra now had all of his attention. Shyra finds Dharam cute but since she was just out of a break-up, she didn’t want to start off a relationship. Dharam was okay with it and the first half of the film revolves around their carefree living and lustful adventures.
The film starts off with Ranveer only in shorts and Vani venting her anger upon the stuffs out there and finally leaving the home. Ranveer calls her a slut and she walks away. The first half of the film is an oscillation in the timeline showing past one year events and present day scenarios. They had vowed to each other that they would never fall in love with each other as commitment sucks, but then the second half of the film goes on to prove that the fundamental principle on which their ‘relationship’ was based upon is reversed and they finally fall for each other. Though the bones of the storyline is pretty much clichéd and could be viewed as‘old wine in a new bottle’, the amazing music by Vishal-Shekhar and the songs with the dance moves keeps you entertained. Ranveer effortlessly portrays the cool dude Casanova role and his witty one-liners, subtle mimicry and hilarious expressions deserve much needed applause. His is the only character holding the film together. Vani brings in the glamour quotient and her hard work on her body can be obviously judged by the audience. That bikini scene is surely bound to raise the temperatures. Though what could have been a bit better is a more dominant role in the movie. The script doesn’t explore her true potential but her smile stole many hearts including mine.

The second half sees a hotshot banker entering into Shyra’s life and her dilemma in accepting his marriage proposal. The film goes through an emotional journey where the respective leads discover their true calling. The climax scene in the church is too melodramatic but that was expected in such a film which at its very heart challenges the set notions of society.

Mark my words, ‘Befikre’ had immense potential to be a stunner. A one of a kind movie which could have attained cult status had more thought been put into the script and had the character development of the actors been more substantial. It had all the ingredients of being an amazing movie in its genre. But the final recipe may not appeal to all.

Whether to watch it or not? Well, if you are a Ranveer Singh fan you must watch it in theatres. Others can give it a watch now that torrents provide you the film within the day of a film’s release. You can surely watch it once and laugh over it, but twice…well for that you need to be a real Ranveer fan.