If you want to test your creativity, here are seven forms of poetry every  budding  poet must try. 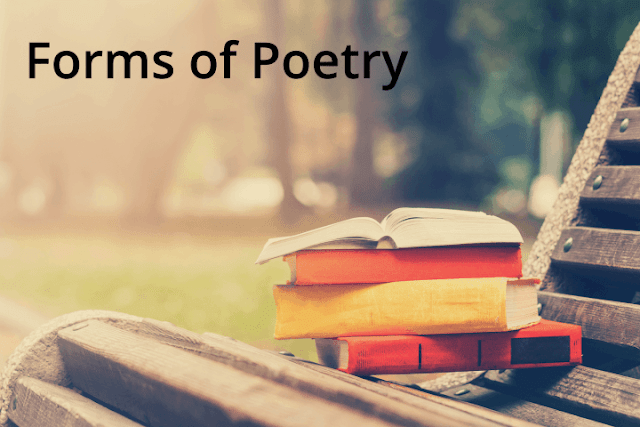 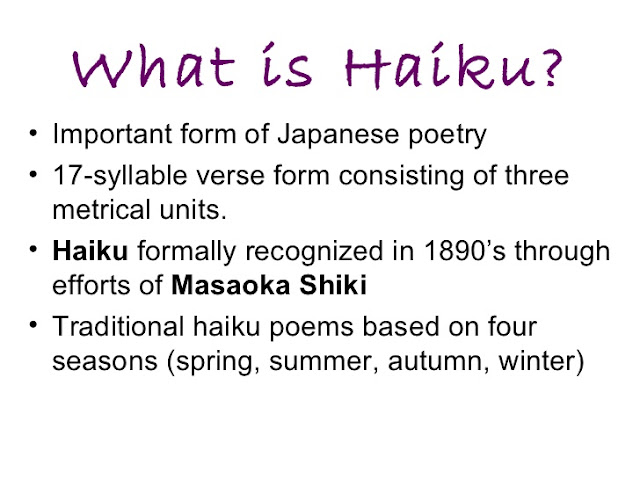 Want to reconcile your infatuation  of numbers  with your poetry?  This Japanese  poetry form is exactly what you need.  Haiku juxtaposes two different images  or thoughts and reflects the difference setting them apart and the similarities you draw between them.  Traditional haiku consists of 17 syllables, in three phrases of 5, 7 and 5 respectively. In English, three separate lines denote the three distinct phrases. Some seasonal reference often completes it.
If you want some inspiration, try haiku's by Batso, Onitsura, Shiki and Ezra Pound, they may help. 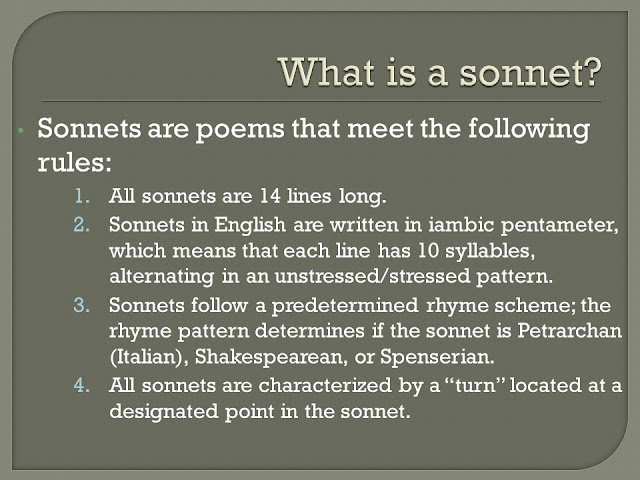 Think you need a soothing touch to your poetic skills? Voila, sonnet is the answer.  Italian in origin,  it is a fourteen line poem following a rhyme pattern - abba,  abba,  cde,  cde or abba, abba, cdc, cdc. It generally includes two parts the first eight lines highlighting a problem and the next six lines proposing the resolution.
Those penned by Lentini, Dante, Michelangelo, Shakespeare, Wordsworth,  Browning are priceless to readers over the world.

REMEMBER : your Volta (turn) - move from preposition to resolution. 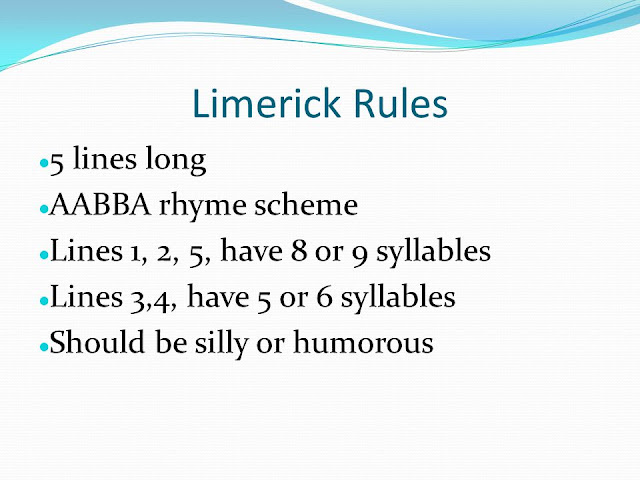 If you are feeling crazy, limericks can help loosen the feeling.  Coming from England,  this five-line poem drips off humorous intent. With a strict rhyme pattern AABBA, it creates an absurd illustration of the subject. The punch in the poem is in the tension in the meaning it implies and it lacks. No secondary English education is complete without these.
Edward Lear whose name has become synonymous with limericks and Gershon Lehman are some interesting reads.

REMEMBER- to conclude with a variant of the first line on a note that is humorous and suggestive. 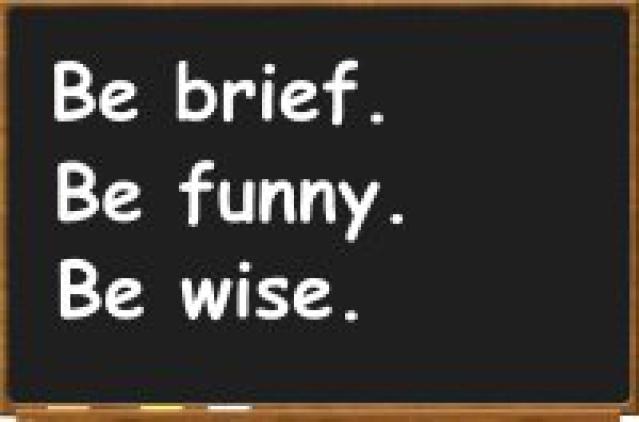 Feeling quite ‘The Thinker’ yourself and want to unsettle your readers? Dosage- Epigrams, in any measure. Derived from the Greek epigramma (‘inscription’) this short, satirical, witty form of poem can leave you baffled.  Created to affect consideration, humor or an impression epigrams populate many poems as a device, or can be non-poetic independent.
Shakespeare,  William Blake and Oscar Wilde created some of the greatest epigrams of all age that entertain the readers every time, not forgetting the puzzlement.

DON’T FORGET- to reserve the most powerful sarcastic attack for the last line. 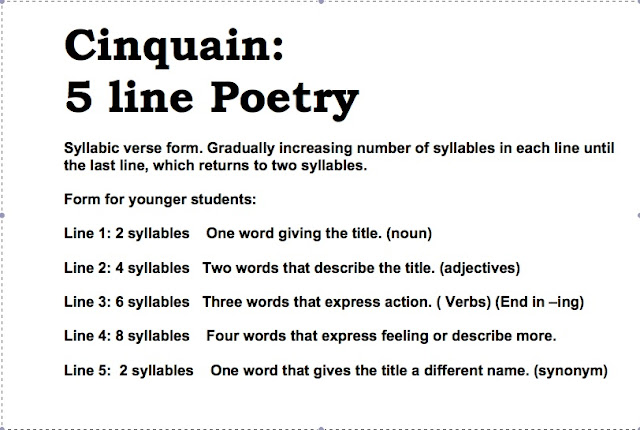 Did you enjoy writing haiku? Cinquain can help you explore further. Inspired by Japanese poetry forms like haiku, cinquain is a five-line poem, in which the lines comprise of a definite number of syllables, usually 2,4,6,8 and 2 respectively. Other variations of cinquain like reverse, mirror, butterfly etc are also known. However, now didactic cinquain has become famous that refers to word count instead of syllables.
Adelaide Crapsey and William Soutar can be read if you need an introduction to cinquain.

DON'T FORGET- to fill the third line with three gerunds and to conclude with a synonym for the subject.

Got a ‘special’ name you want to glorify in your poem? Acrostic poem is what you are looking for. It is usually a form that explores the subject of the word- first, last or other, to spell it out. The most common and simple form of an acrostic poem is where the first letters of each line spells out the word or phrase.
It can be ‘one-characteristic-per-line’, ‘free-form’ or double acrostic.
Nicky by Marie Hughes is one of all time favourites.  Edgar Allan Poe and Paul Hansford too have a share of acrostic poems to their credit.

REMEMBER- if you wish to keep the 'name’ a secret, choose midline words to guard the lips like the last letter of the third word of each line. 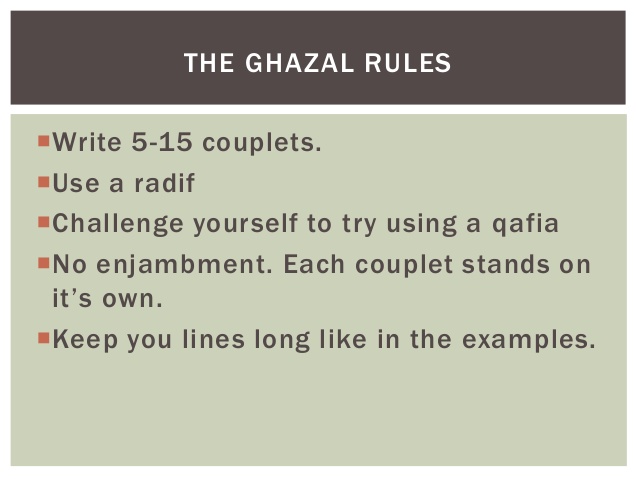 Heartbroken and looking for something to help you release the feelings? Ghazal has been doing that for ages. Arabian in origin, this form still reigns in many of our hearts. It consists of rhyming couplets and a refrain. It is often seen as the poetic expression of separation set against the beauty of love. Sufi saints in it's spread, lent it an element of Sufism, the beloved often being a metaphor for God.
Hafiz and Rumi have been the emperors of this art. Agha Shahid Ali, Francis Brabazon too can be looked up for inspiration.